Arizona Economy Will be Even Better in 2023: Here’s Why

The discussion about the economic outlook was among W. P. Carey School of Business faculty, co-sponsored by the school and the Economic Club of Phoenix.

The dip and rise of the economy through COVID-19, and the recovery, is “unprecedented,” according to Hoffman, director of the L. William Seidman Research Institute and a macroeconomist.

The trade economy is completely disrupted by the pandemic, but Hoffman expects exports to turn around.

READ ALSO: Here are the Ranking Arizona Top 10 lists for 2022

All jobs gained since 2011 have been lost, but “we’re climbing back,” he said.

Inflation is the highest in 40 years. Too much money chasing too few goods is the root of inflation. The pandemic, supply chain disruptions, labor market separations and excessive monetary expansion by the Federal Reserve are the causes, the panel said.

Inflation hits different people differently: lenders are hurt, and those on fixed incomes and renters are hit the most.

According to the panel, the Fed was slow to react. Since March 2021, the Fed has become increasingly hawkish. “Rate tightening is coming,” Hoffman said.

Investment in oil has dropped, so gas prices are up. “Headwinds are everywhere,” he said.

Among the bright spots is a trend of onshoring new U.S. capital investment.

Hoffman’s worries? Tribal politics get way too much emphasis in the media; globalism must be embraced over nationalism; immigration keeps out people who want to work.

Lee McPheters, a research professor in the W. P. Carey School of Business and director of the school’s JPMorgan Chase Economic Outlook Center, said despite the flood of California license plates seen around the Valley, COVID-19 deaths decreased expected gains in new residents.

Job growth is strong at 4.2%, “but that puts us in the middle of the pack,” McPheters said. “Our growth is behind us, and that’s the way we’re looking at it now.”

Unemployment is at an all-time low in 17 states. Arizona has 3.3% unemployment. New Mexico is at 5.3% — the highest in the country.

Arizona is No. 4 in rate of population growth. Many states lost population because of COVID-19, low birth rates and exodus to other states. The fastest-growing states are Florida, Texas and Arizona.

In metro Phoenix, “we expect strong growth,” McPheters said. Single family and multifamily permits will be up in response to housing pressures.

The Phoenix consumer price index, the price of a weighted average market basket of consumer goods and services purchased by households, is at 10.9%. It tops all metro areas.

Wage increases also top all metro areas, at 6.4%, but they’re not keeping pace with inflation.

“What that means is real wages are down,” he said.

The biggest risk to the Arizona economy is the national business cycle. Tech and distribution are the key sectors to watch. Arizona has the most building permits issued since 2006.

The real estate market is the best it’s ever been, but there are some critical concerns, said Mark Stapp, a Phoenix-area real estate expert and the Fred E. Taylor Professor in Real Estate at ASU.

“We have less than one month existing inventory in this marketplace,” Stapp said. What that means for buyers is they had better have deep pockets. The mean new home price is 11.7 % higher than the average earner’s mortgage capacity.

A major cause of the low inventory is years of underbuilding. 2016 was the last time deliveries exceeded absorption of homes. The population is estimated to grow by an estimated 90,600, but there are only 8,500 homes on the market.

“That is an incredibly low number,” Stapp said.

Also, supply chain woes are choking home delivery. “You can’t get them finished all the time,” he said. 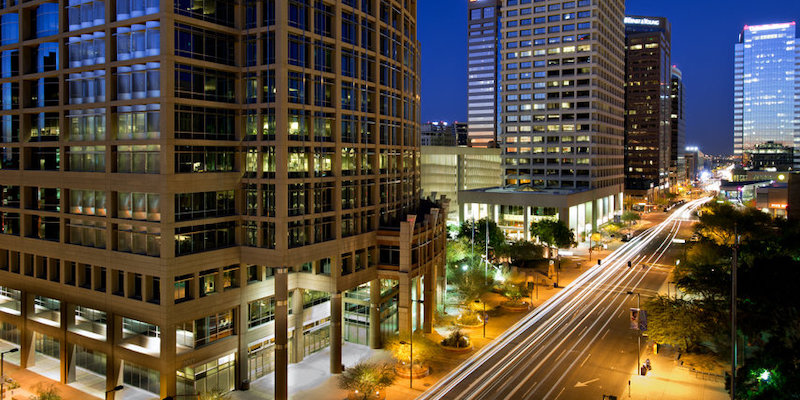